So you have passed your training and you have your SIA licence. It is the first few months of your new job as a security guard or door supervisor. Sooner or later there will be an incident that will bring your training, and experience gained so far to, into the fray.

Hopefully you along with the help of your colleagues will deal with the actual situation, as you should. However, what about the immediate aftermath?

We recently did an article on ‘how to write an incident report’. Here we look at what to do at the aftermath of a crime scene.

If a serious offence occurs where you work then it will be your role to take charge of the crime scene until the police arrive. Valuable evidence can be lost if a security officer fails to preserve the scene correctly. Without that evidence, it may be difficult to trace and prosecute any offenders.

In short, a security guard or door supervisor must take immediate physical charge of the area where the offence took place. Unfortunately the necessary tactics are barely touched upon in your SIA training, meaning new SIA licence holders have to learn from their peers and on the job.

There are four fundamental principles to effective crime scene preservation:

1. Prevent evidence from being contaminated

This means avoiding fingerprints/footprints etc being added to a scene. Never leave any items at the scene which were not there at the time;

2. Prevent evidence from being destroyed

Avoid the smudging fingerprints, or walking on footprints in blood;

3. Prevent evidence from being removed

Do not remove broken glass or other aspects of the scene that you think trivial, in order to have greater access.

4. Preventing evidence from being moved

Do not tidy up the scene, from a forensic perspective the positions of items may be of importance.

If possible it is good practice to upheld these principles along with noting and recording (camera phones can be especially useful here) any details of the scene before anything is moved or replaced.

Also, only allowing people near the scene who actually need to be there is vitally important. Cordon off the area, evacuate the area if necessary, the worst contamination to a scene is that of the general public.

The quicker you alert the police of an incident so that they are able to respond the better. The faster they arrive, the less chance of scene contamination occurring. Ultimately, the decisions that a security officer makes at the outset of an incident, and how they communicate their actions to the police, can greatly affect any investigation.

Forensic evidence is essential if the police are to link suspects to a crime and its victims. It is also an important tool in proving or disproving the differing stories that may occur as people have their own view on events.

As an SIA licensed door supervisor or security guard, your story of events is an important one. You must be able to identify a possible crime scene, evaluating details from a safe distance in order to consider the best possible course of action. A security officer must consider the possibilities of forensic evidence and how best to preserve it. They must be able to react calmly and efficiently in order to clear the scene of any contamination, yet know what details will be most important to the police and be ready to report those details to the police and in a later incident report.

All professional SIA licenced frontline officers should remember this:

By following these three actions on identifying a possible crime scene you will be doing your job as a security officer, and will assist the police on any subsequent enquiry.

We have all watched CSI and seen the way fingerprint evidence can work. The fact that our fingerprints are unique to us all, mean they are invaluable in connecting a particular person to a particular place.

Just as we see in the movies, finger marks are left behind when your fingertips touch a smooth surface. The oil and sweat that we secrete leaves these marks that are actually made from the tiny ridges in our skin.

Marks can also be made by bloodstained fingers, and may be left at the scene by a bloodstained knife or broken bottle. A door supervisor must be very careful not to leave their own marks on such items. If you smudge those of the suspect, the evidence could be destroyed.

The best method is to cover the article with something so that it cannot be touched until the police arrive.

A good security officer will recognize what items may be of forensic value and will ensure that they remain preserved for examination. 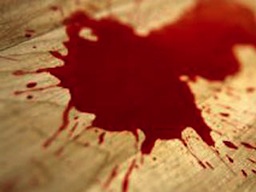 A scene of a serious offence may well contain traces of blood. This can be used for DNA profiling and can provide extremely strong evidence in a serious offences such as murder, violent attack and sexual assaults. A scene may also contain fragments of flesh or pieces of skin that can also be used to DNA profile a suspect.

The way blood appears in a scene is also very important. The interpretation of blood splattering is a method whereby the examiner can determine the amount of blows in an attack, the position of the victim and sometimes the sequence of events in an attack, all by the evidence left by drops of blood on a victims clothes or the splattering of blood on surfaces.

Footprints can be found at most crime scenes, even if not visible to the human eye. As long as they are not destroyed in the immediate aftermath of an incident, they can prove very valuable as forensic evidence.

Believe it or not, boot or shoe prints can be recovered from all manner of surfaces as long as it is not disturbed. Also, the souls of our shoes can be surprisingly unique. As they become unevenly worn the under surface will form its own print, linking suspects to a scene if a specific footprint is found there.

The usefulness of this evidence is again down to how the security officer reacts to a crime scene. Much like any other evidence, visible footprints should be covered to avoid any contamination until the police arrive.

The immediate safety of the public and other colleagues always comes before the preservation of a crime scene. Make sure the area is safe and clear before attempting to preserve evidence.

In any situation where a security officer is dealing with blood or other body fluids they should always wear rubber gloves; both to avoid fingerprint contamination, and to protect themselves from possible infection.

Preserving the scene of a crime is just on of the many duties a security guard or door supervisor will have to deal with in the course of their career. If you have any stories, advice or comments on this, why not start a conversation below.