Investigators from the SIA accompanied licensing officers from Surrey Police force last Friday (23 August 2013) to check that door supervisors were working with valid SIA licenses in the Guildford area.

Similar to our report on the spot checks conducted by the Metropolitan Police in the West End earlier this year, the checks were carried out across a large number of premises forming part of the local night time economy.

56 door supervisors were inspected in total and everyone of them were found to be working with a valid SIA licence. Understandably the SIA have released a statement declaring the success of the operation.

“I am very pleased with the results of this operation; it shows the night-time economy in Guilford is benefiting from vetted, trained and licensed professionals.”

The fact that all door supervisors were working with valid licenses does show that regulatory measures taken by the SIA in recent years seem to be working. 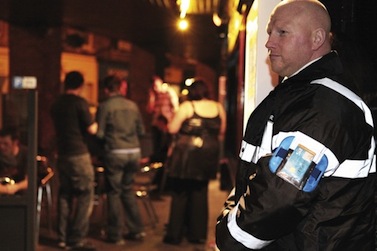 Only one door supervisor was issued a warning – this was for failing to take action after a relevant conviction. On this Darren Woodhouse said:

“Thanks to intelligence from the police we will be conducting enquiries into the individual who was discovered to be working after receiving a relevant conviction. We will continue to share key information to ensure that the licence status of these individuals is reassessed when necessary.

I must however reiterate the need for security operatives to keep the SIA up to date with any changes in their circumstance; failure to do so could lead to prosecution in court.”

A further warning was issued to one individual for failure of notifying the SIA regarding a change of residing address.