Could this be the future of the security industry? Will security guards one day be replaced by robots? And will we be one step closer to Jim Cameron’s Terminator style vision of robots taking over the world?

Will that last bit may be a tad sensationalist, but the fact is, earlier this week Microsoft unveiled prototype robot security guards – and we have to admit, they do look very cool.

The tech giant recently installed a fleet of 5-feet-tall, 300-pound robots at their Silicon Valley campus, (where else would you expect the first appearance of such cutting-edge sci-fi technology).

The robots are fitted with cutting edge security, surveillance equipment that would put any human security guard to shame.

The machines have HD cameras built in, and sensors so they can interpret their organic, protein-based surroundings.

These security guard robots also contain cutting edge artificial intelligence programing that is able to evaluate their environment and sound an alarm when they ‘think’ that something is not as it should be.

These security robots are also remotely connected to the police database so are able to run checks on licence plates to see if the car has been stolen. All of which can go on as background task using the hi-tech computer processing that has been installed.

The K5 robots were actually built by a Californian company called Knightscope.

And instead naming the new machines, ‘Robocop’ the company calls them “autonomous data machines”. Slightly less catchy you might agree.

And while the company states that they have a “commanding but friendly presence,” this can in no way be compared to a normal human security guard, where you can expect a normal human interaction.

This being America, the security guards could be armed. However, the K5 robots will not be carrying any weapons. One suspects new laws will need to be implemented to safe guard this development in the future.

There could be plans to fit the robot security guards with tasers however.

At the moment the robots are being used as a first line of security defense so to speak. Once a situation has been recognised by the K5, they will sound their alarm in the aim of preventing it, or automatically call back up, in the form of a fully-fledged human security guard, or the police. 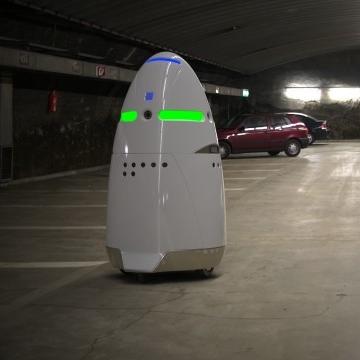 The battery lasts for 24hrs and they can recharge themselves

What ever way you look it at though – security guard jobs have been taken by this new technology, and it does make you wonder how far it will go.

These robots can work with autonomy if need be, and can last up to 24hrs on a single charge.

What’s more, the robot will take itself to a recharge point once the battery is getting low, meaning no engineers need to worry about them.

The company states that the next step is to have the K5’s patrolling the streets as security guards, and part of the police force.